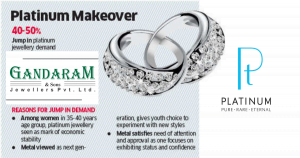 When purchasing a piece of jewellery for yourself or a loved one, you want to choose the best piece – it’s something that symbolizes a relationship that will endure or a special moment in your life. Platinum is 30 times more rare than gold, is naturally white and will endure many lifetimes. To find out why the world’s most precious gem stones are set in platinum and much more.

10 Thinks About Platinum You May Not Have Known